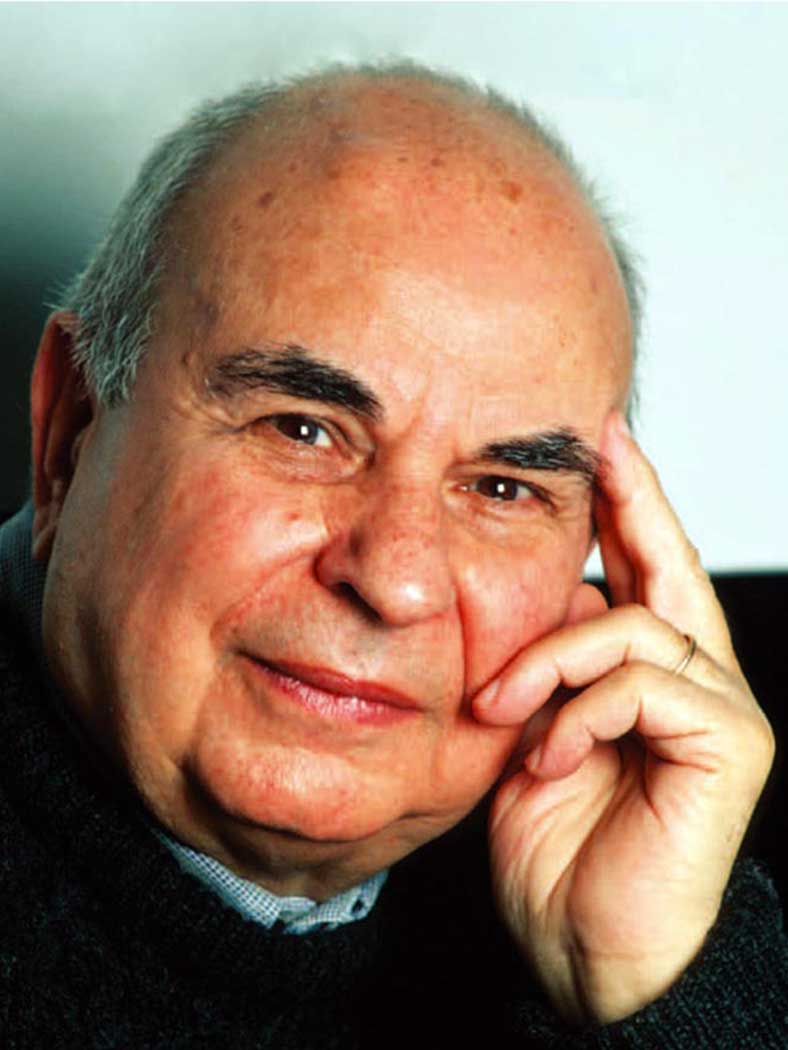 “Olivier Clément was one of the main figures of Orthodox theology in 20th century France as well as a hard worker of ecumenism. He was both historian and theologian, thinker and man of action, always in search of dialogue and deepening, particularly passionate about oriental spirituality. Olivier Clément had an exceptional itinerary and undoubtedly unparalleled in Western Europe. This was the wording of an Agence France-Presse dispatch on January 17, 2009 when Olivier Clément died.

It is particularly difficult to dissociate the event-driven biography of Clément from his spiritual journey. Some landmarks on his journey:

Born in 1921, near the Cévennes, he defines himself as a Languedoc descendant of the Camisards, in an atheistic family atmosphere, in any case fundamentally and obviously anticlerical, militant and socialist. Clément, who at this time is still Maurice and not Olivier - he is not baptized - does not receive any religious instruction. His environment is marked by "paganism and militant socialist atheism", where death is nothingness, God an invention of men and Jesus a myth. Very early on, he experiences what Christian mysticism calls “darkness”, man's anguish in the face of the mystery of God and of existence.

O. Clément studied history. He wrote his Master’s Thesis on Peter the Venerable, Abbot of Cluny. He was a student of Alphonse Dupront for a while, one of the founders of religious anthropology, with whom he collaborated in the Resistance during the war years.

Agrégé of the University (1943), he taught for a long time in Paris at the Lycée Louis-Le-Grand and received from the French State the Ordre National de Mérite.

After a long research in the various forms of atheism then in the Asian spiritualities, the studies of history will lead him quickly to imbibe this synthetic formula of the historian of philosophy Alexandre Koyré: "The history of the thought is inseparable from the history of spirituality ”, an affirmation opposed to any materialist or Marxist reading.

His first meeting, according to his own testimony is - in his head - the meeting with India, which will subsequently give him significant authority to say, without any rejection (there will never be rejection in him), what fundamentally distinguishes Christianity from this non-Christian East: “communion” and not “fusion”. The passage through India will help him precisely in his accepting the notion of the "Trinity". Baptized at the age of thirty - baptized and not converted from Catholicism or any other confession - it is a rare case in France: thanks to this particularity, Olivier Clément will have a journey in the Christian faith free from any resentment, any reactionary reflex, as is often the case precisely with those we improperly call "converts." He himself speaks of his conversion, but it is about a fundamental conversion: conversion to Christ. He does not run away from another form of Christianity, he comes to Christ, drawing from the Source of Life, response to absurdity and nothingness. This destiny, for it is one, will make him an ardent actor and activist for the rapprochement of reconciliation between the Christian East and the West.

He meets in his life the theologians and lay Christians from Russian the emigration (Vladimir Lossky, Paul Evokimov), and thus enters another fascinating universe, that of Orthodox mysticism. In Lossky's “Mystical Theology of the Eastern Church”, Olivier Clément discovers the mystery of the Holy Trinity, everything he had hitherto sought, both the singularity of the human person and the profusion of grace and of divine transcendence.

His conversion to Orthodoxy will ultimately be the fruit of his repeated readings of Dostoyevsky and Berdiaev, of his prayer at the foot of an icon found at an antique dealer in Paris, bringing together Jesus, Mary and John the Baptist in a triptych. An event which he translates as follows: “At one point, God came to seek me and I followed Him. I put in parentheses everything I knew about religions. I trusted Him”. He was baptized at the age of 30 (in 1941). His relationship with Vladimir Lossky, disciple of the philosopher Étienne Gilson, becomes that of master and disciple.

After his conversion, he followed the theology courses organized by the Moscow Patriarchate and in which Vladimir Lossky and Father Sophrony (Sakharov), spiritual son of the starets Silouane, taught. After the untimely death of Vladimir Lossky, he edited several of his handwritten works.

He taught moral theology and church history at the Institut Saint-Serge in Paris, taught at the Higher Institute of Ecumenical Studies, directed the Desclée de Brouwer editions “Théophanie”, collection which has published works devoted to Orthodoxy.

Friend of Father Dumitru Staniloë, he edited two of his books translated into French. He is the editorial secretary of the French-language Orthodox review "Contacts". Doctor of theology from the Institut Saint-Serge in Paris, he is also a doctor "Honoris Causa" from the Institute of Theology in Bucharest and from the Catholic University of Louvain.

During the Soviet era, Olivier campaigned with Pierre Emmanuel in favor of the Christians of Russia. In the 1960s, he thus prompted in Paris the formation of a committee "to shed light on the situation of Christians in the USSR".

From 1976 to 1994 he chaired the Association of Believing Writers which groups together Christian writers (of all faiths), Jews and Muslims.

Co-founder of the “Orthodox Fraternity in France and Western Europe”, he will be its “spiritual father”.

He collaborated with the Patriarchs of Constantinople Athenagoras and Bartholomew for the elaboration of “Dialogues” and received on this occasion the title of Grand Archon of the Ecumenical Patriarchate and the Cross of Saint Peter and Saint Paul from the Patriarchate of Antioch .

Thanks to Olivier Clément, Orthodoxy finds a place in the French intelligentsia. He is the friend of poets (Pierre Emmanuel among others).

Olivier Clément: poet of divine beauty (a film in French by Jivko Paneev and Tatiana Rakhmanova)

Author of around thirty works, at the same time poetic, spiritual, historical, written in an often lyrical language, Olivier Clément is gradually establishing himself as the voice of Orthodoxy, a voice that will resound well beyond France. Jean-François Colosimo, also a professor at Saint-Serge, will define him as "the man who succeeded in bringing Eastern Orthodoxy to France and the message of the West to the Churches of the East".

In the Middle East, he was also the friend of the Patriarch of Antioch, Ignatius (Hazim), who dialogues with Islam and the other Churches, and many Eastern intellectuals. He enjoyed great prestige also in the Romanian Church, under the yoke of the dictatorship, then liberated, attracted, because of his share of Latin culture, by a modern Orthodoxy. Olivier Clément was the spokesperson for an Orthodoxy open to the world and to ecumenical dialogue. Dialogue with Rome first. He maintained good relations with Paul VI, then John Paul II. At the request of the latter, in 1998 he wrote the “Stations of the Cross” read by the Pope on Good Friday. In 1999, he received the Ecumenical Saint-Nicolas Prize, awarded by the Greco-Byzantine Theological Institute, in Bari (Italy).

For his 80th birthday in 2001, he received the Logos-Eikon Prize awarded by the Aletti Center in Rome, for all of his work. At the same time, he received, at the Nunciature of Paris, the honorary doctorate from the University of the Sacred Heart (Connecticut USA).

No observer will be found both so critical of the paralysis of Orthodoxy and so amazed by the treasures of its liturgical heritage, its ascetic and monastic tradition. In an article published in Le Monde in 1993 and remained famous, he was one of the first to denounce the populist and nationalist drift of the Russian Orthodox Church after the dislocation of the Soviet empire. Likewise, after the dismantling of Yugoslavia, he was severe with his co-religionists engaged in the wars in the Balkans - war between Orthodox Serbia and Catholic Croatia, wars in Bosnia, later in Kosovo.

More than any other, he has been aware of the nationalist excesses generated by the historical and theological link between religion and nation, in Russia, Greece, Serbia ... He will be remembered as a man who pleaded for a free conception of Orthodoxy in a plural and free world. He knew that, in the curls of incense in its churches, under the gold of its cupolas and iconostasis, it risked becoming a museum religion. But he had permanently with Orthodoxy a relation of demanding tenderness, always lucid.

Olivier Clément died on January 15, 2009 at his home in Paris, the funeral service was celebrated at the church of the Institut Saint-Serge. He was buried in the cemetery of Marsillargues. (Herault)