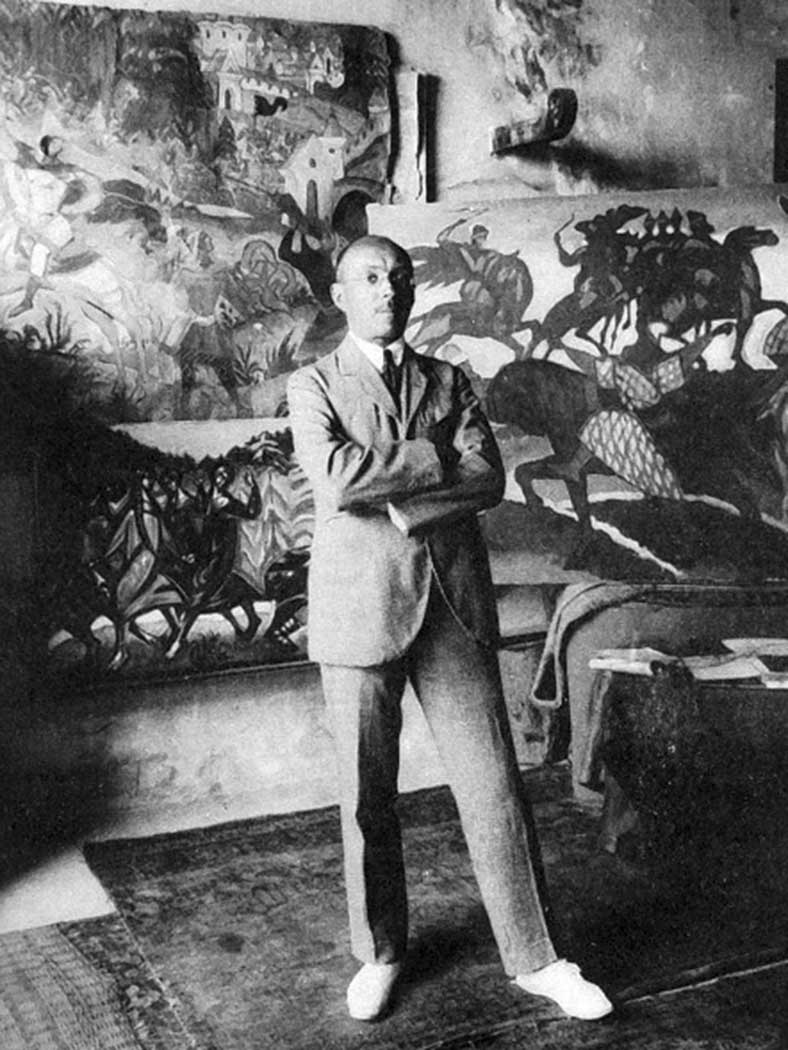 Dimitri Stelletsky is born in 1875 in a family of a military engineer. The members of this family belonged to the anient legendary clan of the Eleozorovs. Stelletsky passed his childhood in the estate of his father, not far from Belovezhskaya Pushcha. In 1896 he enrolls in the Academy of the Fine Arts of Saint-Petersburg. He took a great interest in the Byzantine roots of Russian art. Therefore he recopies « The Tale of Prince Igor » and illustrates it with miniatures. This work was bought by the Tretyakov Galery. From 1900 onwards Dimitri Stelletsky, alone or with his friend Boris Kustodiev, makes from time to time visits to ancient Russian cities and monasteries : in 1903 he and B.M. Kustodiev visited Novgorod and in 1907 Stelletsky made by himself a visit to the monasteries of Ferapontov and Yurievsky, traveled through the north of Russia, wrote about his impressions and made sketches of the frescos and icons. After graduating from the University in 1904, he leaves for Paris. He attends classes at the Académie Julian, in the hope to obtain an employment at the Manufacture de Sèvres. But he doesnot succeed and returns to Russia.

Between 1908 and 1910 he does work for theaters and operas, amongst other things producing sketches for the historical drama of A. Tolstoy, « Tsar Fyodr Ioannovitch », for the Alexandrinsky Theater and for the opera « Snegurotchska » of N. Rimsky-Korsakov, as well as for the Mariinsky Theater. He participated in the production of the opera « The Girl of Pskov » of Rimsky-Korsakov as well as the « Russian Seasons » of S.P. Diaghilev.

During this period Stelletsky becomes close to Vladimir A. Komarovsky, an artist who, too, is inspired by the art of the icon. The two painters have produced together in 1913 an iconostasis for the church in the estate of Count Alexander Medem (New Martyr) near the town of Khvalynsk, in the province of Saratov, and one year later they have decorated with frescos the church of Saint Sergius of Radonezh on the Camp of Kulikovo.

In 1914 D.S. Stelletsky makes a trip to Italy and to France. France. In particular the small town of La Napoule near Cannes becomes his refuge for the rest of his life. This is what he writes about his forced emigration : « The climate of the south, the nature and my activities in a foreign country are far from what I like. Here I am cut off from the roots of my talent, from Russia, which is my soul and which is dear and close to me. I have not yet sufficiently breathed the Russian air, the Russian fields, and above all the Russian people. The only thing that always has inspired me is the work for Russian life and Russian matters ».

After having founded the association « The icon » with a group of friends in 1925, he paints icons and frescos for Russian churches, for the church of Saint Sergius Theological Institute in Paris which he has completely decorated between 1925 and 1927 with the help of Princess Elena Sergievna Lvova (Kniagina) ; for the iconostases of the Church of the Resurrection of Grenoble (1938) and of the church of Saint Raphael, and for other churches as well.

Stelletsky has established a long friendship with the composer Igor Stravinsky (1882-1971) . They worked together at the same time for the prestigious Russian ballets of Serge Diaghilev, who also was expelled from Russia. Dimitri Stelletsky provided the Russian ballets of Diaghilev with the magnificent beauty of his sets. During the years 1931-1935, when he lived in Voreppe, 25 km from Grenoble, Stravinsky without doubt attended church services in the Church of the Resurrection of Christ in Grenoble. In 1917 he had been expelled from Russia. According to the musician Nadia Boulanger, sister of the composer Lili, Stravinsky was deeply religious. The contemplation of the theophanic beauty of the Alps afforded to the soul of Stravinsky the peace which he needed in the Villa de la Véronnière (actually the « Médiathèque Stravinsky »), after his tumultuous friendship with Serge Diaghilev at the time when the latter has made the Russian ballets with Nizhinsky, Stelletsky, Coco Chanel, and Balanshin, Michael Fokin, Leonid Massin and Serge Lifar.

On October1, 1938, Stelletsky finishes the iconostasis of the Russian church of the Resurrection in Grenoble (5, avenue de Vizille). Fr. George Shumkin (1894-1964) was its Rector at the time. The church had been founded ten years earlier, in 1927, at the decision of Metropolitan Eulogy, to serve the Russians in Grenoble, Rives, Rioupérou in Isère, Ugine in Savoie, and Argentière-la-Bessée in the department of the Hautes-Alpes. These Russian communities were mainly composed of officers and soldiers of the army of Wrangel who have been demobilized and exiled ; with the help of the recrutement agencies in Constantinople and the Balkans they had received modest work contracts in the several facturies of these important industrial centers in the French Alps. The church of Saint Tikhon of Zadonsk in Rioupéroux, in the vally of Romanche, has been founded by the year 1928, thanks to the efforts of General General Lev Lvovitch Illiachevitch (1877-1936).The iconostasis of Grenoble est without dispute the most modest one of all the iconostases painted by Stelletsky, made with the rough material which reflects the lifestyle of these old officers who had to face the harsness and poverty of the life of a workman which prevented them to diversify their activities, to found families, to make progress and to provide an offspring.

In November 1943, during the partial evacuations of the coastal fringe, or later in February 1944, during the complete evacuation of the Côte d’Azur by the Germans attending the debarkment of the allied forces in La Provence, Dimitri Semionovic leaves for a while La Napoule. He goes to the Isère, probably to Laffrey, and then to Fr Valentin Bachst in Allevard. He takes with him the second version of Slovo, his notebooks with sketches. He entrusts the greatest part of his studio collection to Russians in the region of Antibes. He returns to the parish of Fr Georges Shumkin and paints some icons for his church. During the period from August until Octobre, Stelletsky finds himself in Allevard-les-Bains (Isère), in the place called La Tour-du-Treuil. He writes to the matushka of Fr Valentin Bachst (1904-1963) - who probably was living in Le Fenouillet, in the Cévennes, where just before the War he had bought a house – that his studio was destroyed by the Germans in 1944. Stelletsky paints the « Horse Archers in the Steppe » (dated 1944, private collection) for the family Bachst., as well as the iconostasis of their house chapel (which has been destroyed, but photos of it still exist).

The last two years of his life, which he spent in the Maison Russe in Sainte-Geneviève-des-Bois, have been particularly difficult for him. When Dimitri Stelletsky died he was almost blind.

After the great immigration of Russian refugees to France after the Revolution and the Civil War, the family Semenoff Tian Chansky (to whom also Bishop Alexander, auxiliary Bishop of the Archdiocese, belonged) has in many ways supported the great painter, in particular by offering him their hospitality.